This is our first full week of summer vacation. I wrote last week about how challenging the break would be this year – one kid at home trying to avoid anxiety and panic triggers, one kid at a different day camp each week, and me trying to balance both of them while also muddling through one of my busiest work seasons of the year.

The hardest thing in all of that is helping my son through his minutes, hours, days. We talked a ton in recent weeks about how weekdays would be. We negotiated, and planned, and negotiated some more. And we came up with a plan that seems solid and doable. Part of that plan included giving him this first full week of summer to do (almost) anything he wanted (almost) all day.

Last night was rough. I was talking him through the things he would “have to” do today – including coming with me to drop his sister and a friend at day camp and making up a ninjutsu belt test that he missed over the weekend. He wasn’t happy about either of those “have to” items and we spent about an hour cycling through anger, anxiety, and sadness before we could calm him down enough to go to bed.

This morning, it was as if last night never happened. He got in the car with no trouble when it was time to drive the girls to camp, and, on his own,  double checked what time we would have to leave for the dojo for his belt test. I even felt good enough about his state of mind to leave him at home alone for about an hour while I got an allergy shot and picked up some groceries.

The middle part of the day was calm. He watched YouTube videos and I multi tasked on laundry and some work emails. He seemed just fine when I gave him 60 minute, 30 minute, 15 minute, 10 minute, and 5 minute warnings for turning off the computer. I was feeling incredibly hopeful about how the day was going.

But then it was 2pm – time to turn off the computer, put on his gi and go to the dojo. And just like that, he was having a panic attack. It was bad enough that I had to give in and say he did not have to go to the dojo. That piece of information minimized his panic and anxiety, but those were quickly replaced by immense sadness and self-hatred – which for him lately are also accompanied by attempts to hurt himself and requests for other people to hurt him too. It’s ugly, and heartbreaking, and messy, and exhausting. I spent 30 minutes literally holding him down and talking to him calmly as he thrashed and cried and tried to hurt himself. By the end we were both physically and emotionally fried.

A couple of hours later, my daughter was dropped off after day camp. I was excited to hear about her day, and stepped outside to greet her, the friend and the friend’s father. My daughter went barreling past me without a word. Her friend said “We had so much fun! We both got red wristbands.” Her friend’s father said, “She’s upset that she didn’t get the blue wristband.”

The wristbands are for levels of swim proficiency. You need a blue wristband to use the kayaks in the bay. The red wristband only gets you access to a row boat or the dragon boat with an adult. My daughter had been looking forward to kayaking. The red wristband was cause for major tween drama and angst. After the afternoon I’d had with her brother, I did not have the head space, or the energy, or the wherewithal to deal with tween drama and angst. In not my finest parenting moment, I essentially told her to get over it and added that she should probably stay in her room until she could find a more pleasant attitude.

With a little bit of space and perspective, I can empathize with her frustration – especially after she told me that her stomach was hurting during the swim test. She’s been struggling with tummy trouble for a few days, and on another day she probably could have passed the test for the blue wristband. She hates that red wristband, and honestly so do I.

Both of my kids are hurting today. Her hurt isn’t as big or potentially life altering as his hurt, but it is just as real. It is just as real, and in some ways even more heartbreaking. She has missed out on a ton of stuff this past year because of her brother’s battle with anxiety, panic and depression. She has had to be mature beyond her years more times than I like to acknowledge. She has had a really rough year, and we really want her to have an amazing summer to heal some of her wounds. Today wasn’t a great start. But there’s tomorrow, and the next day, and 71 more days after that for fun, and laughter, and healing of wounds.

But I still hate that red wristband… 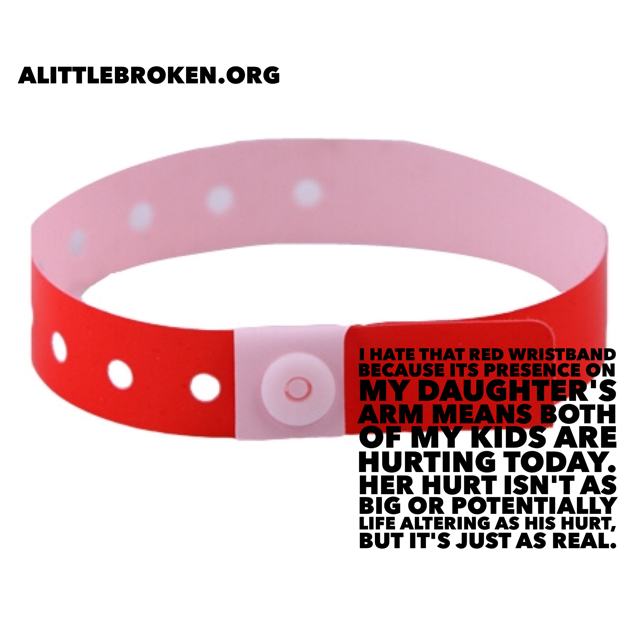