I was scrolling through my Facebook feed yesterday morning and noticed that a friend from college had posted about Netflix airing a new original series based on the Anne of Green Gables books by L. M. Montgomery. I “liked” the post, and thought about how it was probably time to begin sharing one of my childhood literary obsessions with my own daughter.

Later in the day, I was scrolling Facebook again and noticed that several women had commented on the original post about the new Netflix series….and all of those women were friends from college. At this point, I added my own thoughts to the comments – including the question “What is it about Anne and Wells women?”

I attended Wells College in Aurora, NY.  At the time I was a student, it was a women’s liberal arts college. (The college became co-ed in 2005.) It was a time, and place, and an experience that shaped me into the woman I am today. It was a magical place and time, (I graduated one year before the first Harry Potter book was published, but in the years since I have been known to describe the college as resembling Hogwarts), where personal growth was encouraged, community was fostered, laughter and tears were shared in equal parts, and grace was lived out loud.

So what is it about Anne and Wells women? If I took a poll of my friends who graduated from Wells, I’d venture a guess that the vast majority of them would say they did read the Anne books as young girls, or at least watched the movies sitting in a dorm room.  Anne Shirley is fearless, unpredictable, intelligent and compassionate. She isn’t perfect. She’s real. She’s somebody I could both relate to as a young girl, and also aspire to be like. The women I went to college with came from a wide range of backgrounds, and we have all gone on to an even wider range of “adult lives”, but there is something at our very core that unites us. It’s a spirit that lies at the center of each of our beings. I recently was back on campus for my 20th reunion, and wrote about that spirit as being Joyful Confidence. Anne Shirley personifies joyful confidence. Wells women personify joyful confidence. That’s what it is about Anne and Wells women. That and the fact that Anne Shirley understood, “Young men are all very well in their place, but it doesn’t do to drag them into everything, does it?” (L. M. Montgomery, Anne of Green Gables)

Once I had followed that thought thread to the end, I picked up the next thread. What lessons did I learn from Anne Shirley,  and the other characters in those book, that I want my daughter to learn and own as she is teetering in the space between childhood and adolescence? There are so many life lessons in these books, but these are the ones I want most to pass along to my daughter.

Be yourself and speak your mind, but always be open to people and experiences that may shape you or change your opinion. “I do know my own mind. The trouble is, my mind changes and then I have to get acquainted with it all over again.” ― L.M. Montgomery, Anne of the Island

When you live life with confidence, people will often be influenced by what you think and what you do. Use that influence for good…be a change maker and live with compassion. “We ought always to try to influence others for good.”  ― L.M. Montgomery, Anne of Green Gables

Life won’t always be easy and you won’t always win, but never be afraid to try. If you learn from your mistakes, you will always come out a stronger person. “Next to trying and winning, the best thing is trying and failing.”  ― L.M. Montgomery, Anne of Green Gables

Find your people. Build community. “Kindred spirits are not so scarce as I used to think. It’s splendid to find out there are so many of them in the world.” ― L.M. Montgomery, Anne of Green Gables

No matter how bad things seem, know that there is always tomorrow. Each day brings a new opportunity to be your best self and shape the world for yourself and others. “Isn’t it nice to think that tomorrow is a new day with no mistakes in it yet?” ― L.M. Montgomery, Anne of Green Gables

It IS nice to think that tomorrow is a new day with no mistakes in it. It is also nice to think about how much fun it will be to share Anne Shirley and her friends with my daughter,  and discover what life lessons she is able to pull from the works of L. M. Montgomery. 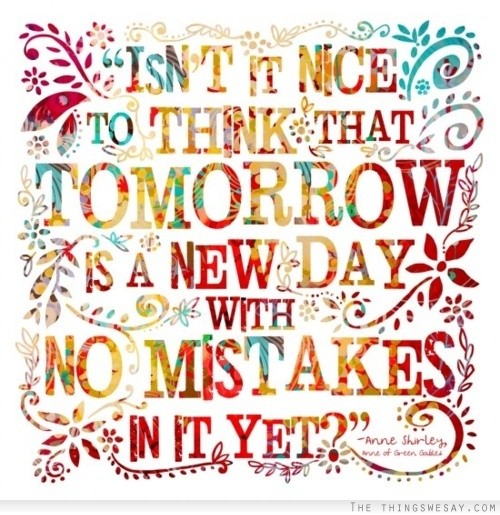