by Dena Abramson BabbPosted on February 24, 2018

Earlier this week I wrote about how angry I have been to hear a resurgence of the wildly inaccurate and incredibly harmful societal misconception that mental illness = violence. This scapegoating of “easy targets” feeds fears, leads to misinformed public opinion, and increases stigma toward a population which is already stigmatized and marginalized. This scapegoating allows the public conversation to remain in a space that  does not acknowledge or address the larger societal problems.

We all know the children’s saying; “Sticks and stones may break my bones, but words can never hurt me.” I’ve even been known to use it with my own kids, but only when the stakes are fairly low – preschoolers telling each other “you’re not my friend”, elementary school kids telling each other “you’re not good enough at (soccer, handball, tether ball, etc.) to play with us”, middle schoolers telling each other “your shoes are ugly.” Not nice? Absolutely. Intentionally mean and harmful? Maybe, but not certainly. Hurtful in the moment, but small stuff in the grand scheme of things? Without doubt. These are all the sort of “sticks and stones” talks I have had with my kids.

But intentionally choosing words that are derogatory, inflammatory, stigmatizing….that is not sticks and stones. It is trees and boulders crashing down in a landslide and destroying everything in their path.

Ever since the tragic shooting in Parkland, FL there has been a deluge of tweets, public comments, and new stories where words like “savage sicko”, “insane monster”, “nuts” and “crazy” have been used in reference to the shooter. And while there is mounting evidence that the shooter does in fact struggle with depression and possibly other untreated mental health issues, there is no benefit in pundits, lobbyists, journalists and even the President of the United States using words that demonize, stigmatize and discriminate from their public platforms. Not sticks and stones…trees and boulders.

I was quick to call out CNN earlier in the week when I repeatedly heard “trees and boulders” type statements being used in their stories. But today, my phone dinged with an alert and the story was this – “Trump’s language on school shooter’s mental health could be harmful, experts say”  With that article, CNN did something to help shape a more constructive conversation.

Language can be harmful. I have said over and over again, that I I am not an expert. I am a mother with a story to tell. A story that I tell because I know there is great power in giving names to the things that feel frightening. A story that I hope helps to break down the stigma surrounding childhood and adolescent mental illness.

But there are experts – mental health practitioners, professors, researchers, policy advisors – who are saying so much of what I try to point out. They are saying that language matters. When we allow words like “sicko” and “monster” to enter the public dialogue about a person who struggles with mental health, we minimize that person to  being no greater than their diagnosis. It is no different from minimizing a person based solely on their physical ability, skin color, gender, or sexual orientation. Minimizing language – stigmatizing and discriminatory language – is harmful to a person and is harmful to society.

Sticks and stones. Trees and boulders. Words matter. Language matters. This isn’t somebody else’s “problem”, this is a responsibility for all of us. We can do better for this generation. We must do better. 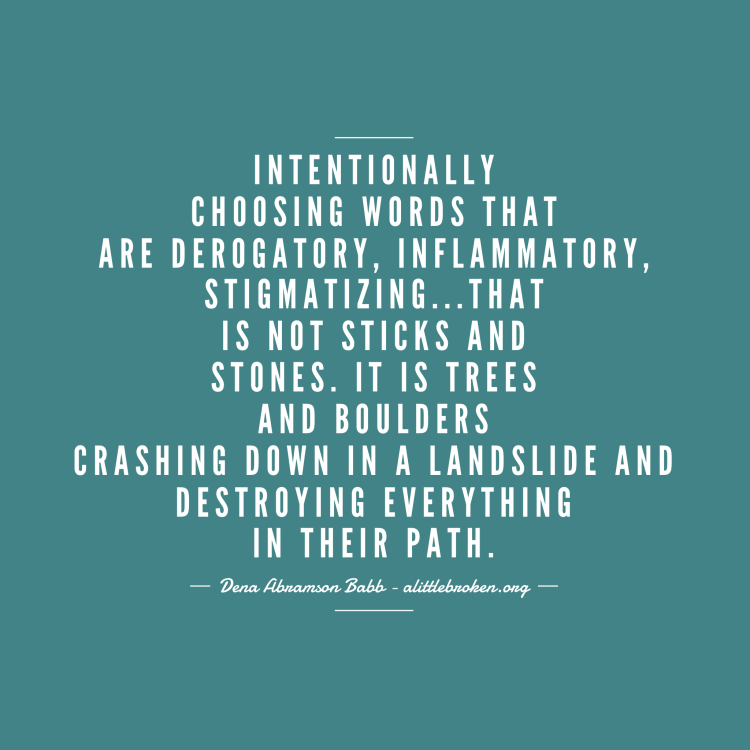