We saw my son’s psychiatrist yesterday. We knew going in that we’d walk out with either a dosage or a medication change. After a lengthy conversation about how things had been going for the past two months (short version is “pretty bad”), it was not surprising to hear the doctor say he thought we should try a different class of drug to manage the volatile mood swings our son experiences. The surprise came when the doctor was informing us of all of the potential side effects of this new medication.

Potential side effects are part and parcel of every medication for everything from the common cold to cancer. The list of potential side effects for the various psychiatric medications my son has cycled through includes increased or decreased appetite, weight loss or gain, increased sleepiness, headaches, and stomach upset. From that list, the only side effect he has actually experienced is weight gain – and given the fact that he is a rapidly growing 13 year old boy who occasionally “eats his feelings”, it’s difficult to determine if weight gain is purely related to medication.

All in all, we’ve been pretty lucky in the area of potential and actual medication side effects.  And while I don’t think our luck has run out, we are for the first time facing a serious potential side effect. Serious as in “potentially fatal.”

Psychiatrist  – ”I believe this could be a good option right now, but I have to tell you there are some side effects. Most notably the possibility of a rash that could be fatal. I’ve never had a patient develop a rash, but you know I have to tell you it’s possible.”

Just like that we made a decision to try a medication that has the (very slim) potential for a fatal side effect. We didn’t hesitate, we didn’t vacillate, we didn’t question. We just agreed to give it a try. Our reality of raising an adolescent battling mental illness is that we are willing to try just about anything that will give our son a chance to not just survive, but to actually thrive. So if the psychiatrist who we have come to trust and respect over 3 years tells us he believes the potential for positive outcomes on this medication outweigh the slim potential for a fatal side effect, there is no question we will take the prescription and fill it as quick as we can.

None of that is to say we are ignoring the fact that this medication has the potential for serious side effects. The words “potentially fatal” have a way of ringing in your ears long after the words were spoken. In the hours after that appointment, I went about making dinner, answering a few work emails and supervising my son as he packed for a weekend school trip to Catalina Island. Through all of that the new medication was running through my thoughts.

I sometimes find that if I make a quick social media post about something nagging at me, I am able to process it just enough to stop the nagging thoughts. After a few hours of nagging medication thoughts, I typed a quick post on my Facebook page. Getting the thoughts out into the world did ease my mind a bit. It also opened my thoughts up to the comments of others, and one lovely person included, “Talk about being in between a rock and a hard place” in her response to the post.

Between a rock and a hard place is where we live, and it’s the best description I have for describing the reality of parenting a child with mental illness. I’ve actually written about the rock, the hard place, and the space in between twice before – first in 2016 and again in 2018.

Parenting a teenager living with mental illness is constantly making the choice between a rock and a hard place, while simultaneously looking for the ease of the space in between. In this case, it is choosing to add a new medication to our son’s regimen even with potentially serious side effects (rock), because we are willing to try everything possible to help him find some peace even when that something feels scary (hard place). That is a choice we make without question or doubt, because we are hopeful it will once again bring us to the beautiful space in between where the anxiety and depression are managed, light returns to our son’s eyes, and life is being lived in the fullest way possible. We’ve made it to that space between before, and it’s well worth the risk of potential medication side effects. When all is said and done, we have very little control over the “rock” or “hard place” moments. It is the choices we make in those moments that help us find our way back to the space between – and sometimes those choices include deciding to try a medication that scares the heck out you, closing your eyes, saying a prayer, and watchfully waiting to see what comes next. What comes next could be harder, but what comes next could also be the lovely ease of the space between. The space between feels like a light filled canyon full of wildflowers and is very much a place to which we all want to return. 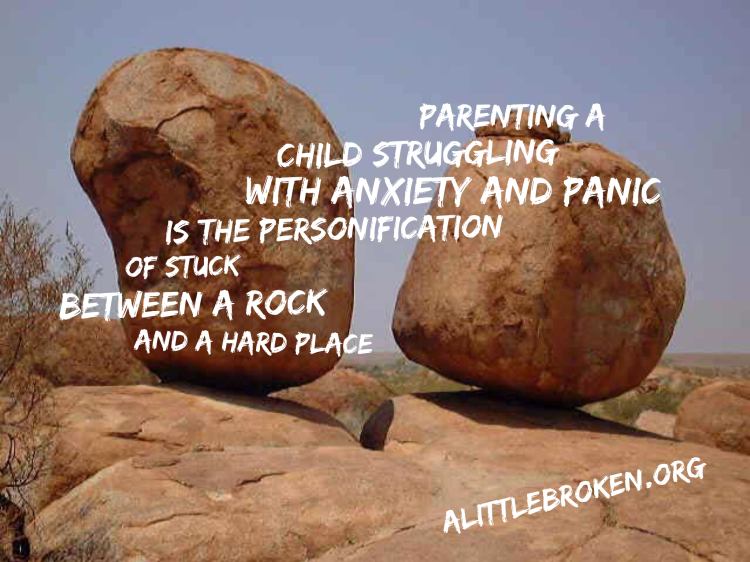