My son began training in the martial art of ninjitsu when he was 7 years old. From the very first lesson he loved it and was hooked. By the time he had trained long enough and showed enough mastery of technique to advance to his second belt, he had declared his intent to become a black belt. The Timehop app on my phone was kind enough to remind me this morning that the day he made that statement was exactly 3 years ago today. 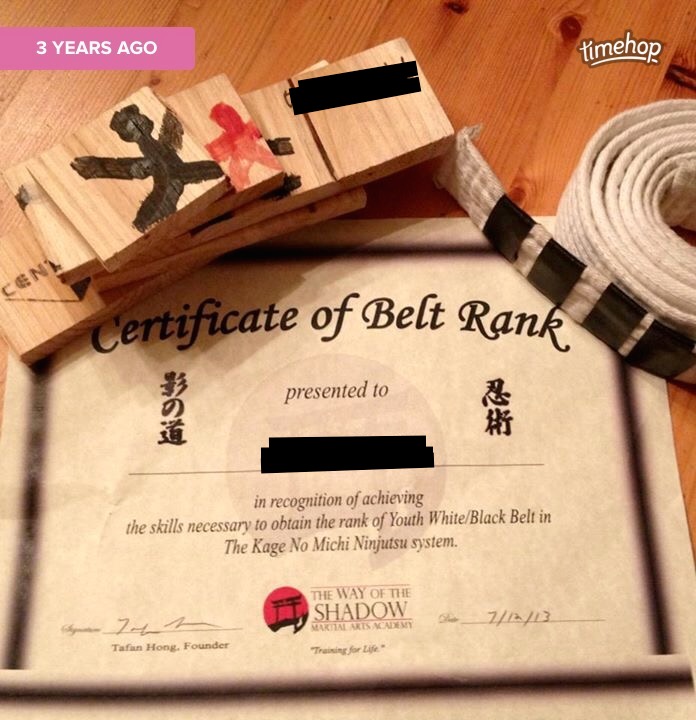 Ordinarily, seeing a reminder like that would have been an “aww, I remember that” sort of moment. This morning, however, that memory was perfectly timed to be a saving grace.

For a long time, the dojo was one of my son’s few “safe places.”  Even when he was having major anxiety and panic attacks most other places in his life, the dojo remained a safe place. That all changed  at the beginning of June when he had the first of several panic attacks at the dojo. The panic attacks were followed by doubts and anxiety about his physical ability to train and worry about what the sensei, instructors and other kids would think of him. The dojo no longer felt safe and he began to have panic attacks just thinking about having to go there. He declared his intention to quit.

Since the very thought of the dojo had become a trigger for him, we decided to let him take a break. He missed most of the month of June and the beginning of July – including a rank test and a belt test that would have advanced him to brown belt (2 belts away from being a black belt).

Over the weekend, my husband and I decided that this was the week we were going to try to get him to return. He’s been on his new medications for almost 3 weeks, and while he still has high levels of anxiety and there are still panic attacks as well as episodes of anger and depression, in general he is steadier than he was back in June. We knew that the longer he stayed away from the dojo, the harder it would be to get him back. We also knew that even if he said he didn’t care anymore about earning a black belt, he didn’t really mean it.

So yesterday there were several conversations about today being the day he would go back. He wasn’t on board. There were tears, mild panic, and anger. He continued to declare his intentions to quit. And right when I thought we might not ever convince him – we went with a minor bribe.

He had been asking for permission to buy a couple of graphic novels for his Kindle, and we had not allowed it. The possibility of purchasing those graphic novels was enough of a carrot last night, that by the time he went to bed his screaming protests had mellowed into quiet sighs. This morning he asked if he could still get the books if he went to class this afternoon. I told him yes, and then I showed him the picture from Timehop. I reminded him about the goal he once set for himself, how much love he has for ninjitsu, and how far he’s already come toward meeting his goal. And then I prayed he would be able to make it to the dojo and through his class without having a panic attack.

He went. He was nervous, but he went. He made it through class, and at one point was even laughing with his training partner. He did it! And he’s talking about the “next class”. And he asked if I had been able to reschedule his missed belt test. He’s back on track to black! (And at this very moment sitting on the couch devouring the 2 graphic novels we purchased as soon as we got home from the dojo!)